A History of St Dunstan’s Church

Our worshipping community meets here most weeks, the latest generation in a long line of faithful Christians dating back at least as far as the 11th century. The Domesday Book tells us there was a priest in Hunsdon in 1086. In 1087-1135, the time of William II or Henry I, Roger de Mowbray gave the Church to the Prior and convent of Merton. It is known that there was a Church here in 1291 because it is mentioned in the taxation of Pope Nicholas.

This page is not an exhaustive history of the church, but we hope it gives you a taste for what is here. If you would like to visit, please contact us in advance – the church building is now locked most of the time after we had some vandalism. We would be only too pleased to show you around at a mutually convenient time.

Henry VIII used Hunsdon House (situated to the rear of the church building) as a hunting lodge. It is claimed that four successive English sovereigns worshipped in the church:

The North wall of the nave is thought to be 12th century. The remains of frescos thought to depict the Seven Deadly Sins can be seen over the doorway.

The Western bell tower was probably built by John Tyrell who held the Manor of Hunsdon in 1423-28. He erected a wooden screen across the tower arch which had 8 coats of arms painted on it. Tyrell probably built the wooden North porch too; it is thought to be early 15th century.

The window at the West end of the North wall in the nave is thought to be 16th century. It was covered by an iron work grill on the outside which has sadly disappeared.

The Church was practically re-built during the mid-15th century by Sir William Oldhall who held the manor then. In 1450-60 the roof of the Church was raised; the line of the original roof can be clearly seen over the tower arch. The South wall of the nave was pulled down and rebuilt 2ft further out with a door opposite the North door. The chancel was probably lengthened at this time too. Also about this time, a rood screen was erected with a stone staircase at the side so that the rood loft (a gallery above the screen) could be reached. The screen was carved oak passing across the Church at the chancel arch.

During the reigns of Henry VIII and Edward VI (particularly the latter) rood screens were considered superstitious and ordered to be taken down. All that remains of the screen in Hunsdon is the lower part, the dado, about 4ft high carved with foliage and flowers. The stone staircase that led to the gallery is still accessible, but now leads nowhere! 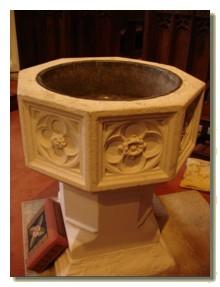 The font dates from about 1500 and is made of clunch. It was re-cut in 1851 in London but the design is unaltered. It is suggested Mary Tudor was a godparent for a child baptised in this font.

The North Chapel, now used as the vestry, is faced with Tudor bricks and it is thought it was built in the middle of the 16th century. It is however, also thought that this Chapel is an extension to a pre-existent, much older chapel, as the window in the East wall has been dated at around 1320. Perhaps this was an element of the original East wall which was simply moved further eastwards at the time of the extension.

The Chester and Calvert memorials were moved from the North wall of the chancel to the North wall of the vestry in 1872, so that an arch could be built between the chancel and the vestry and an organ installed there. The memorials were moved again in 1911 to their present positions on the North and South walls of the nave. The organ was under the tower from 1866 until room was made for it in the vestry and it was moved to the North Chapel in 1872. Before that, there was a barrel organ in a gallery at the West end of the nave. This gallery was built in the early 19th century. To do this, the second tie-beam from the tower end had to be removed, the South door was also removed and a window installed to lighten the Church. The window was filled with stained glass in 1851 to commemorate the wedding of Miss Caroline Phelips of Briggens, but this was badly damaged by lightning in 1913 and is now of plain glass.

The organ was re-built in 1966 and the consul put in the chancel.

The South Chapel was probably built by John Carey 3rd Lord Hunsdon, in 1610 or 1616, he died in 1617. It was for use as a mortuary Chapel and contains the large standing wall monument of alabaster to John Carey and his wife. Some of the family pews with their Jacobean decoration are still there. The screen between the Chapel and the nave was probably erected at about the same time, as was the hexagonal pulpit of carved oak. In the South wall of the chancel there is a piscina and a sedilla. The twisted altar rails are 17th century with recent additions at the ends. 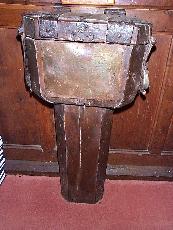 The old alms box near the North door is said to be 17th century (see picture). The original slot was very narrow and was enlarged to take the modern coins pre-1900. It is no longer in use.

At the North side of the chancel arch is an inscription, “IHC Maria” which is all that remains of an inscription dating back to about 1450. Traces of an inscription on the opposite side of the arch were visible when the Church was cleaned in 1912. It is suggested that these words were ‘misere nobis’, thus making the entire inscription translate as “Jesus, Mary, have mercy on us.” (IHC was a common way of representing the name of Jesus.)

The old pews were demolished in 1872 and the present ones put in. The pews are said to have been designed by Philip Webb in approximately 1872. Webb was an associate of William Morris and architect in William Morris Company.

There is a monument to Francis Poyntz on the North wall of the chancel. Poyntz was a member of Henry VIII’s court and is said to have died of the sweating plague in 1528. Also, on the North side of the chancel is a beautiful standing wall monument to Sir Thomas Forster lying in his judges’ robes who died in 1612. The rails around the Forster tomb are exactly the same as those around the tomb of Mary Queen of Scots in Westminster Abbey.

The present East window was dedicated to Mr James of Bonnington in 1914. Pieces of old glass (1440-60) were retained at the top. The South wall windows of the chancel are about 1450; the western most one being re-built about 1850. 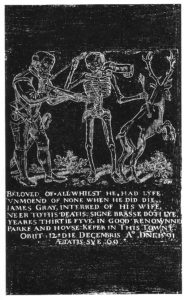 There is a small memorial to the Rev. Richard Thackeray on the South wall of the chancel. He was Rector of Hunsdon for 16 years and died in 1861, aged 46. He is said to have been a cousin of William Makepeace Thackeray.

The unusual brass plate to James Gray, park-keeper who died in 1591, is on the North wall of the nave (see picture).

In recent years, the building has been rewired, the roof has had considerable repairs carried out, and all the timber, pews and inner walls have been treated and decorated.   Toilet facilities and running water (supplied from a borehole in the church grounds) have been provided in the tower and a floor created to provide a ringing platform above.

The building remains a treasured feature of the local landscape, and is regularly used for the purpose for which it was constructed, namely the worship of the God and Father of our Lord, Jesus Christ.

With gratitude to Miss Marjorie Atkins and Mrs Sandra Head.