A History of St John the Baptist’s Church

There is only so much a web page can do to describe our church building and its place in the heart of community life here in Widford. There are some photos below, but not everything is on view here. We strongly encourage you to come and look for yourselves! You might also like to look up the website of our “Friends” at www.friendsofwidfordchurch.com.

The church owes its origin to the Cluniac Monks. The great Abbey of Cluny, Saone et Loire, France, was founded in 910 by William, Duke of Aquitaine. Members of the Order subsequently established themselves in England and founded Bermondsey Abbey in 1082. In 1118, Robert, Earl of Leicester and Mellent, bestowed the Manor of Widford on those Monks who were responsible for building this church.

The oldest part, built in the 13th century or earlier, was considerably extended in the late 13th and 14th centuries when the main building as it now stands was substantially completed. The centuries since then have however seen, a constant process of renovation and alteration as each generation has loved and cared for this ancient building. It is today, as through its history and as its founders intended, not a museum but a living and working place, hallowed by prayer and in constant use for worship of God and for service to the community.

The Church Registers date from 1558 and all except those in current use can be inspected at Hertfordshire County Record Office.

No valuable church plate or other artefacts are on display in the church which is open every day although locked at night and under constant watch. The oldest communion cup, dating from 1562, is currently on loan to the Abbey of St Albans where it can sometimes be viewed as part of a changing display of articles of special historical interest.

The building is of flint and stone construction in tile Decorated and Perpendicular styles. It consists of Chancel, Nave, South Porch and an embattled Western Tower of Transition Norman date. The spire is made of copper and was rebuilt in 1888 to commemorate Queen Victoria’s golden jubilee. The tiled wagon roof of the nave and chancel dates from 1868 when it replaced a lower and flatter original roof.

The Vestry and the Organ Chamber (with boiler house under) on the north side both date from the 19th century.

It is of interest to note the steps leading down into the church, a common feature of old churches dedicated to St John the Baptist. Above the south door is some Norman style zig zag work.

The Doors into the church, south and north, are original, being hung about 1286 by the same craftsmen who worked in Much Hadham.

The Nave is the oldest part of the building and is 13th century work or earlier. A Piscina (south side) marks the extent of the original church; opposite it, but now filled in, there was a spiral staircase leading to a rood loft.

The Font dates from the 14th century except for its pedestal which has been renewed. Visible on it are carvings of the head of a lion and of a nun. A new oak font cover, designed and carved by David Dewey of Widford, was presented by Sir Roger & Lady Parker to mark the Millennium.

The Chancel and the Sanctuary were added before the end of the 13th century. There is a sedilla or recess for a monument on the south side and a stone pilaster of Norman work. This was the only one saved from eight similar pilasters found in 1868-9 in the walls of the tower during restoration; they may perhaps have been the legs of a stone communion table in the ancient church.

The East Window is a memorial to John Eliot, the ‘Apostle to the Red Indians’ who was baptised in this church in 1604 and died in 1690. It was presented by his American descendants in 1894.

The Ceiling. The wagon-headed and ribbed ceiling, with its excellent acoustics, dates from 1868 when the walls were raised and the roof was replaced. The six old beams, three of oak and three of walnut, which carried a low roof when the building was extended at the end of the 13th century, now serve no structural purpose. The paintings on the chancel ceiling were the work of Miss Hadsley Gosselin of Blakesware and include emblems representing the Passion of Christ, the Sacraments and the Evangelists. This work was completed and dedicated in 1883. 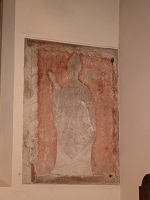 The Mural Paintings. On both sides of the East Window are faintly coloured 14th century paintings which were restored in 1936 by Professor EW Tristram. The figure on the right in cope and mitre and giving a sign of blessing is unlikely to be, as was once supposed, the Abbot of Cluny since the crozier is held as by a Bishop and not by an Abbot. The painting immediately to the left of the window is difficult to discern – suggestions have included a depiction of the Earl of Leicester and Mellent or a scene of The Annunciation. On the north wall is a painting which some have thought to be of St John the Baptist standing either in or behind a font, whilst others conclude it is Jesus coming as judge, seated upon a rainbow.

Organ. This was built by Eustace Ingram senior and installed in 1890. Although electric light was installed in 1939, the electric organ blower, replacing hand-operated bellows, was not fitted until 1950.

Furnishings and fittings. The choir stalls, Rector’s stall and pews are Victorian. A gallery formerly at the west end of the church was removed in the 1860s. The chancel was re-ordered in 1956 to plans by Peter Hansen Bay, during which the pulpit, front rows of choir stalls and a low screen were removed and the chancel and sanctuary floors were repaved.

The Tower, built in the 14th century, is, with its West Window, a good example of Early English work. A spiral staircase leads to the clock chamber and a steep fixed ladder from there to the bell chamber.

Bells. There is a ring of six bells with a tenor of 7.25 cwt in Ab. Both this and the 4th bell were cast in 1624 and bear the founders’ stamp of Robert Oldfield of Hertford. The oldest bell is the 5th, cast circa 1480 at the London Foundry, inscribed on its waist ‘Sancte Katherina ora pro nobis.’ None of these has since been re-cast. The 3rd bell dates from 1869 (John Taylor & Co., Loughborough) and the 2nd from 1890 (Mears & Stainbank, London). A new treble was cast and hung in 1985 when all the bells were removed, repaired and re-hung. A framed listing of all the then villagers commemorating this successful venture can be seen in the bell tower.

Alms Dish. A handsome wooden alms dish, carved in Germany with the insignia of the Royal Air Force and presented to the church at the end of the Second World War, can be seen in a wall ease near the main door.

The cross-stitched Hassocks in all the pews have been worked by many parishioners and others to mark the year 2000 and to express thanks to God for many blessings and appreciation of the part which this church has in village life.

The old graveyard surrounding the church was closed for burials in 1903 when the “new” churchyard across the road came into use. In the south west corner of the old graveyard is the grave of Mary Feild (sic), grandmother of Charles Lamb, essayist, who was constantly in Widford when this lady was housekeeper at Blakesware (“Blakesmoor in H——–” which features in Essays of Elia).

A fine Elizabethan gateway in the west wall of the old churchyard gave entrance to the churchyard until the late 19th century. This was known as the “Manor gate.” Traces of the monastic building which once bordered the churchyard can be seen in the wall to the right (north) of this gateway. The wall to its left (south) fell down during a gale in 1996 but has been rebuilt by the owners of the small private graveyard which can be glimpsed through the arch.

The church clock, made by J. Smith of Derby, was placed in the tower in 1912 to commemorate the Coronation of King George V. It is unusual in that it has Arabic (rather than Roman) numerals.

Floodlighting (the gift of Mr& Mrs Adrian Evans) is another commemoration of the Millennium.

The Lychgate of the Old Churchyard was given by the Hamond family, members of which were Rectors during much of the late 18th and 19th centuries.

The Lychgate of the “New” Churchyard was erected as a memorial to the men of Widford who fell in the 1914-18 War. An oak panel (on the right) was added in memory of those who gave their lives in 1939-45.