A History of the St Francis Chapel

Originally, the St Francis Chapel as we know it now was an outhouse attached to the 19th century Rectory on the southern edge of the main village. It comprised a central stable with a store either side, one used for storing fodder for the pony and the other used for garden equipment.  The stable itself had a manger and a cobbled stone floor, gently sloping towards a central floor drain.

The last person to own and stable a pony there was the wife of Revd Michael Pumphrey, Rector of the parish from 1951 to 1959.  Soon after his successor, Revd Gerald Lane, arrived in 1960 it was decided that the stable should be used as a little chapel. 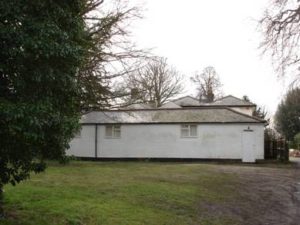 Indeed, remembering that Mary lay down our Lord Jesus to sleep in a manger, everyone felt that “our stable” was a very appropriate place to hold our 8.00am services of Holy Communion.  Of course, before the building could be used it had to be thoroughly cleaned, with the walls and ceiling being given a coat of whitewash and the cobbled stone floor disinfected and scrubbed.

Work on converting the Rectory stable into a usable chapel was well underway in 1962, when Revd Lane wrote the following in the Hunsdon and Widford Parish magazine:

“The building has been lengthened by taking in the fodder room at one end and the Rectory coal store at the other.  The walls and ceiling have been plastered, a new floor put down, and a new lighting and heating system installed.  The window frames have been replaced, and more window space provided so that the building is now much lighter.

This has all been done by means of a generous gift of £1,000, and we hope that this will be sufficient to meet the cost of the alterations.”

The plans for the use of the chapel were quite clear, if slightly provisional at the time; the article continues: “The chapel is to be used for weekday services, for services on Sunday sometimes if the Bishop allows it, for Sunday School, and for all kinds of meetings, and youth and children’s activities during the week.  It should be adequately and comfortably furnished for all these purposes.” 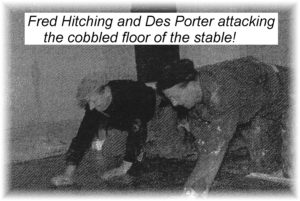 The Bishop did allow it, and the stable became regularly used for services.  During the warmer months of the year it was also used by the Mothers’ Union and, as anticipated, for other occasional meetings.  Currently we hold a Sunday service in the chapel every month and Sunday services are held in the chapel every week throughout the winter months.

At the time of the conversion, the chapel was clearly still part of the Rectory proper – and Revd Lane was obliged to point out, “By law, the building and the land on which it stands is mine and must remain mine.  I am, however, very glad indeed that it should be used in this way, and, so long as I am here, this position will continue.”

In 1965, Revd Lane moved on, but the chapel remained in use during the incumbency of his successor, Revd Cecil Kirkpatrick.  It was in this period that the new Rectory was built and the Old Rectory (as it became known) was sold by the Diocese into private ownership (to Lord Aldenham).  At that time, the stable-cum-chapel (and the land upon which it stands!) was conveyed by the Diocese to the parish to ensure the continuation of the valuable ministry that had begun there.  Their forward-thinking decision has provided a centre of church activities near the heart of the village for the last four decades.

Over the years, the chapel has been used for all the activities Revd Lane had envisaged and church services and meetings continue to be held regularly in the chapel.  For most of the last ten years (as in previous) it has also played host to a week-long children’s Holiday Club, but usage generally of the building is limited.  Though some people comment positively about the “cosy” atmosphere we experience when we meet there as a church, it is not really big enough for our full congregation to gather in any comfort.  Time has also taken its toll on the foundation-less building, and we are fully aware that it is slightly damp and prone to shifting with the seasons as the roots of nearby trees stretch out for moisture.  Accordingly, though a report we commissioned has determined the building is safe to use at present, we are currently deliberating what we should do about widening cracks in the walls and a sagging roof!

We are grateful to Mr F Hitching and Mrs B Hollylee for historical information and sources used in this article.