Five hundred years ago, an Augustinian monk called Martin Luther decided to start a debate about some of the things he thought were wrong with the Roman Catholic church.  In an act which was pretty much the 16th century’s equivalent of writing an “open letter to the Times”, on 31st October 1517, he pinned a paper to the church door in Wittenberg where he was a lecturer at the university.  It had 95 bullet points.

Luther’s discovery changed his circumstances.  Instantly, he found himself out of favour with the church authorities including the Pope.  (You can imagine how popular he was when he later declared that Scripture had authority over the Pope – not the other way round.)  But at the same time, speaking of the truth he had unearthed in the Bible, he said, “Here, I felt that I was altogether born again and had entered paradise itself through open gates.”

His thinking went on to change the world.  Over the century which followed, others picked up his ideas and developed them further, rediscovering truths of the Christian faith that had been buried over time.  A reformation of the church had begun, and neither the religious nor the political landscape of Europe would ever be the same again. 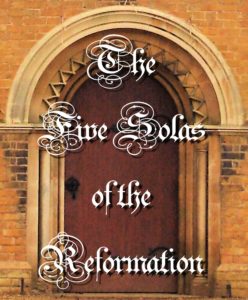 Over the course of this term, Mark is hosting a series of five discussions to consider these five key truths.  Each session will look at one “Sola” and consider its implications for life today.  These discussions will be held in the St Francis Chapel in Hunsdon at 2pm on Thursdays, repeated at 8pm for those who cannot attend during the day.  The dates are on the calendar.

Hope you can come…